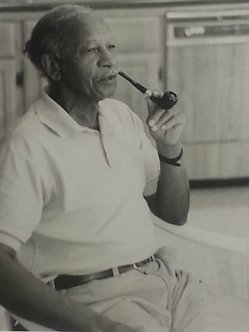 Albert J Walker was the second child born to the late Mack and Mary Tilford Walker on December 9, 1910, in Frankfort, Kentucky. His siblings, George, Howard, Minerva and Mary, preceded him in death.

As young man, he pursued his education while working to help his father support his family.  He graduated from Clinton-Underwood Street High School in Frankfort, Kentucky, with honors.  He was an athlete, scholar and Senior Class President.  Upon graduation from high school, he went to Howard University in Washington D.C.  After the sudden death of his father, he returned to Cincinnati, to continue his eduaction at the University of Cincinnati.  Even though he worked several jobs, his pursuit of education, remained a priority.

Albert was married to the late Harriet Ferguson Walker for over 53 years.  They were blessed with two daughters, Carol Ann and Marsha Gail.  Along with their mother, he always reffered affectionately to them as "His Girls".  His devotion to his family and dedication to his church and community, were steadfast throughout his entire life.

Albert served his country as a Second Class Petty Officer in Naval Air Service, during World War II.   He was a machinist mate and worked on repairing and rebuilding airplanes.  After training in Memphis, Tennessee his active duty station was in Pearl Harbor, Hawaii.  Upon the completion of his tour of duty in U.S. Navy, returned home and

started his career employment with United Postal Service.  He retired as a Branch Finance Associate in 1972.  He also worked as a Real Estate Agent, an Adult Education teacher and volunteered assistance with Income Tax filing for the elderly.  In his liesure time, he enjoyed bowling, golf and travel.

Albert was dedicated church worker.  He served Mt. Zion Methodist Church faithfully with his service and contributions.  He attended the Sunday School Adult Class and often taught the lessons.  He served as a Trustee, audited the church financial records and was on numerous committees.  He fixed things that needed repair around church and took great pride in his work.  His dedication and service to Mt. Zion, have been steadfast for over 58 years.

Anybody that's ever come in contact or spent extensive time with Albert knows this man was a political, financial, business savvy... Juggernaut.  He enjoyed relaxing evenings smoking his pipe, listening to Ohio State sports or MLB, as he waited for his bowl of ice cream.  In todays modern times he  would be considered a Ventutre Capitalist or Angel Investor with futuristic visions coupled by the innate abilty to reason and process.  His teachings of faith, wisdom, sacrifice, love and personal integrity still rule supreme in all lives of his immediate family and friends.

The teachings, influence, and guidance of Albert J. Walker will forever remain as permit fixture in the day-to-day operations and efforts at the Walker Mechatronics Research & Development Group, LLC.